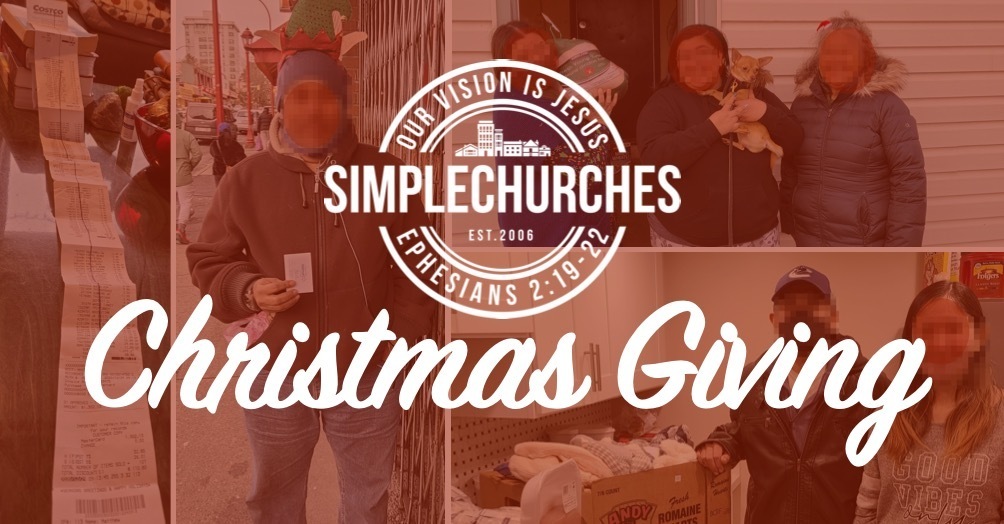 As 2020 rounds the corner to a new year, we wanted to share a wonderful Christmas report with you. Last week we introduced to you our new church in Coquitlam, led by the Ryders. The Ryder’s daily life and work often put them in contact with folks who find themselves financially disadvantaged. So the council decided that providing them with $2000 to disperse in gifts would be an important use of our church’s funds.

On the 23rd, the Ryder’s did a huge shop for hampers and gift cards, and on the 24th, they distributed the gifts around the city.

First, thank-you to the Ryder’s for all their hard work, and second, here is a list of the stories and gifts. Be encouraged, and Merry Christmas!

Name(s): Donavon and Alison*
Story: They live in an SRO (Single room occupancy) on Granville. Both are low income, with Alison having mental health barriers (Bi-polar).
Gift: $100 Walmart gift card for furnishings and pantry supplies; they just moved into their SRO.

Name(s): Sally and son.
Story: Sally and her family live together with her grandparents and mother in a small house in New Westminster. Sally’s three-month-year-old baby passed away two days ago. The whole family is low income.
Gift: $200 Christmas hamper at Costco with meats, freezables, and gifts for Sally and her son.

Name(s): Sharon and Gary.
Story: Low-income seniors who live in New Westminster. They are grandparents and God-fearing folks. Gary and Sharon live with their children and have chronic health conditions.
Gift: Christmas hamper of $200 from Costco. This will include blankets, meats, bulk food items, and two Christmas gifts.

Name(s): Larry.
Story: Larry has severe FASD (Fetal Alcohol Syndrome). He is currently living in shared accommodation and has just recently aged out of youth services.
Gift: $100 Walmart gift card will give him diversity in purchasing clothes, food, and house items.

Name(s): Nelson
Story: Nelson lives in the DTES part of the homeless initiative to house people because of the COVID-19 limited exposure program. Nelson is currently living in a hotel on a wait-list for a shelter bed or other housing options.
Gift: $200 Walmart gift card because it will give diversity in purchasing clothes, food, and house items.

Name(s): Jonny.
Story: Jonny is a low income senior and a member of the Dewdney Trunk house church and uses his vehicle to support seniors in the surrounding area.
Gift: $100 gas card.

Name(s): Albert.
Story: Albert is a senior living in the DTES with a very low income.
Gift: Albert has requested a “No Frills” gift card for $200. “No Frills” is in his vicinity for ease of access.

Name(s): Malcolm and Val.
Story: Malcolm and Val have a two-year-old daughter. Both are low income.
Gift: $200 Christmas hamper from Costco with meats, vegetables, milk and a gift for their daughter.

Name(s): Sherri.
Story: Sherri has two children. She is a single mom with one of her children (eight years of age) suffering from a mental health disability. They live in BC housing.
Gift: $200 Costco hamper filled with meats, vegetables, bread, milk, and gifts for her two children.

Namer(s): Megan.
Story: Megan is a single mother of low income with an eight-year-old daughter. They live in BC housing.
Gift: $200 Christmas hamper from Costco, including meats, freezables, milk, vegetables, and a gift for her eight-year-old.

* All names have been changed to protect identities.

How To: A Simple House Church Liturgy